This wiki is being considered for deletion due to inactivity. Please comment on the community portal if you have any objections. 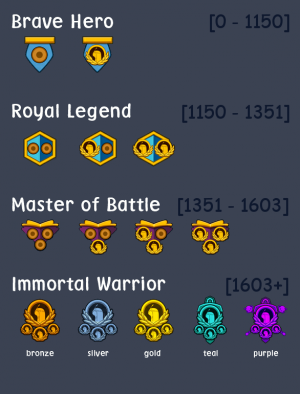 Tiers are Adventure Time Battle Party's method for pitting players against opponents of similar skill, used in conjunction with the Elo rating system to place players in the appropriate tier. There are four named tiers in the game, as pictured to the right, themselves divided into sub-tiers. Note, however, that sub-tiers don't affect who you will be matched up against, they only serve to indicate your general progress to the next tier, as represented by a medal icon next to your username.

Every player has an Elo score tied to their account; it is updated every time the player finishes a match and tries to determine the most appropriate tier for them judging from their match history. The amount gained or lost depends on both of your Elo score and your opponents' Elo score; a detailed explanation of its mechanics is provided here.

If a player quits a match before it is completed, he will receive an overall penalty to his Elo score. The player can then get rid of this penalty if he plays several consecutive matches without quitting. This might change in a future patch, as is being discussed here.